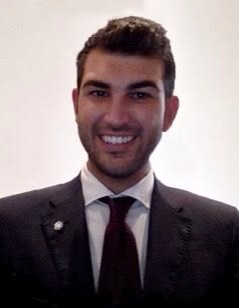 Education and career history
Graduated in Law (J.D.) at LUMSA University of Rome in 2014, with a dissertation in Commercial Law. During the university period, thanks to the Erasmus project, he attended the third year at the San Pablo CEU University of Madrid.
He took part twice during the university studies, in 2008 and 2010, in an international conference simulation at the ONU in New York and promoted and organized several conferences within the University.
After graduation, he attended a Masters in International Business in Cambridge (UK) and then he undertook two-year legal practice in a primary Legal Firm in Rome, making an important experience in the field of Criminal Law, working at the same time in the field of International Law and Commercial Law.
He took part, in 2016, at the XXV edition of the Corporate Law Masters, at the “Il Sole 24 Ore” Business School, following which he worked in Milan, in the Risk & Compliance department with a focus on Legislative Decree 231/2001, at the headquarters of a primary International Law Firm.
Qualified as a lawyer in 2016, he was admitted at the Italian Bar Association on 2017
Between 2018 and 2019 he carried out the 1st edition of the Navigation, Transport and Port Logistics Law Masters at the University of Bologna.
From 2019 he joined MR International Lawyers.

Personal interests
He is used to work, both in Court and out-of-Court , with issues related to compliance and Legislative Decree 231/2001, dealing with risk assessment and gap analysis activities as well as with the drafting of 231/2001 Models.
Particular attention was then paid to criminal offenses of an "associative" nature, as well as in contractual matters and with regard to problems related to transport in general.
He has gained a wide experience on cases referred to carriers and freight forwarders’ liability, cargo loss and/or damages, thefts and robberies occurred during on-road carriages, containers carriage.

Association membership
Member since 2016 of the “European Academy for Economic and Cultural Relations” (AEREC), he regularly participates in training events, conferences, and even international conferences.

Personal life outside the law
Sports fan with a preference for swimming. Interested in associations and politics, he loves to travel and read.