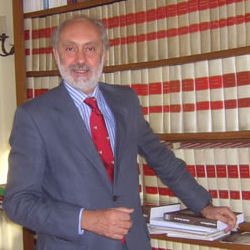 Catholic University of Milan (J.D. First Class Honours, 1972). State University of Milan, Department of International Law (Post-graduate Research Fellow 1972-1976). City of London Polytechnic (Diploma in English Law, 1972). Parker School – Columbia University, New York (Diploma in Comparative Law, 1980).
Internship and professional training with London and Milan international law firms.
Admitted at the Italian Bar (1974) and qualified to practice before the Supreme Court (1989). Founder of Riccomagno Law Firm (1983).
Member since 1979 of the International Bar Association where he has discharged various functions including the representation of the Bar of Genoa and the office as Member of the Council of the Section on Business Law (1992-1996).
Professor appointed by the Faculty of Law at the University of Genoa and holder of a course of lectures on Contracts of Navigation (2004). Lecturer on issues of shipping law, multimodal transport and contracts of terminal operators at master’s programmes of the State University of Milan (2001) and the University of Genoa (2006). Lecturer on international contracts at the University of Genoa during the academic year 2014-2015 and in many training courses for legal practitioners organized by European Court of Arbitration – Italian Delegation, Genoa Bar Council and Academy of Law, Mediation and Arbitration. Arbitrator appointed directly by the parties or by national and foreign courts of arbitrations in maritime, commercial and corporate disputes.
After the merger of “Riccomagno Lawfirm” with MC Studio Legale Internazionale (2016) he is co-founder and senior of MR InternationalLawyers.

Besides teaching and lecturing as above mentioned Mario Riccomagno frequently acts as speaker or panel chairman at conferences, seminars, workshops and legal symposia either in Italy or – more frequently – abroad. Generally speaking he has organized or attended over eighty legal events in approximately forty years of activity.

Co-author of the Code of International Conventions (Milan 1977) and of the book on Liability of Lawyers and Insurance (London 1995), editor of the book on Multimodal Transport in the Today Legal Reality (Turin 1996), author of the Italian chapter of Shipbuilding in Getting the Deal Through (London, 2013-2015) co-author of the book on The new civil and commercial mediation (Rome 2014) and co-author of the book on Arbitration and enterprises (Genoa 2016). Mr. Mario Riccomagno has also written fifty articles on legal issues that have been published in various Italian and foreign law magazines and journals. He is member of the Editorial Staff of Il Diritto Marittimo, European Transport Law and Il Foro Padano.

Personal Life outside the law

Married with his charming Franca they have two sons. Curious of any form of cultural enrichment he loves travelling, meeting people and sports in the open air. He used to practice mountaineering, skiing and running. Now he enjoys trekking.